In my college summers, I was a camp counselor at a Girl Scout camp in Michigan. (Bear with me, this is going somewhere.) During my first summer, I loathed having to spend one night per week sleeping outside and tried to find any way out of it. During the staff training week the second summer, something clicked—I think it was sleeping “under the stars” instead of in a tent—and I fell in love with the outdoor work. For those next two summers, my campers cooked almost every meal possible over fires, we always slept outside, and against all odds, they always loved it. I remember having a conversation with another counselor about it:

Me: It’s so strange! I don’t understand how I always end up with entire groups of kids who love cooking and sleeping outside. I’m so lucky!

Friend: Um. Well. You know that they love it because you love it, right? 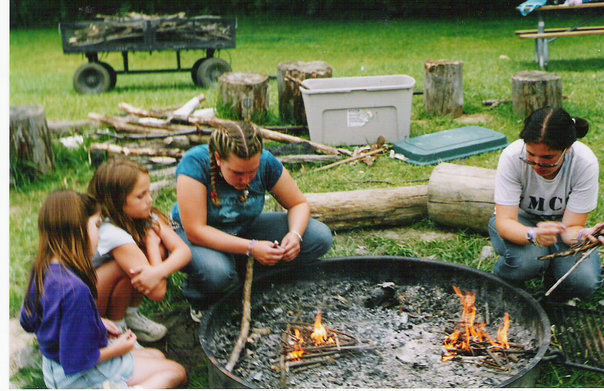 Last year, I got the chance to be loaned out to the math department for one section and teach a group of 9th graders some geometry. Seriously, though. How lucky can I get?

I had taught a 3 week course on geometry once for a summer program, and I had totally fallen for it. For me, it had been all about constructions and watching kids think in such a different way while making sense of how to use those tools. (Solving things graphically was something I found attractive—big surprise, right?)

I couldn’t wait to share that with these kids, and having an entire year with them was such a treat. My luck held in my teaching partner (Chris, who taught the other section of the course), and we each agreed to try a lot of what the other person wanted to do (for me, that was delving into the Exeter problem sets; for him, it was teaching constructions).

Even partway through the year we were already in wonder over how these students had been sorted so well into our sections. His students already felt pretty comfortable with algebra and would find varied, clever approaches to coordinate geometry problems. My students, on the other hand, were true tinkerers. They avoided algebra in any way possible, and they LOVED their compasses. In fact, give them any obvious algebraic geometry problem and they would find three or four or five different ways to solve it graphically.

Here’s a quiz problem from October:

And here are some examples of student solutions:

First, a kid duplicated the triangle by duplicating the angles. She argued that when you added the other two angles together, they seemed to add to 90º, making the case for a right triangle. (Not 100% there yet in her argument, but on a cool, unexpected track!)

Next, a kid who duplicated the angle she thought was 90º three more times and showed that it make a complete circle. 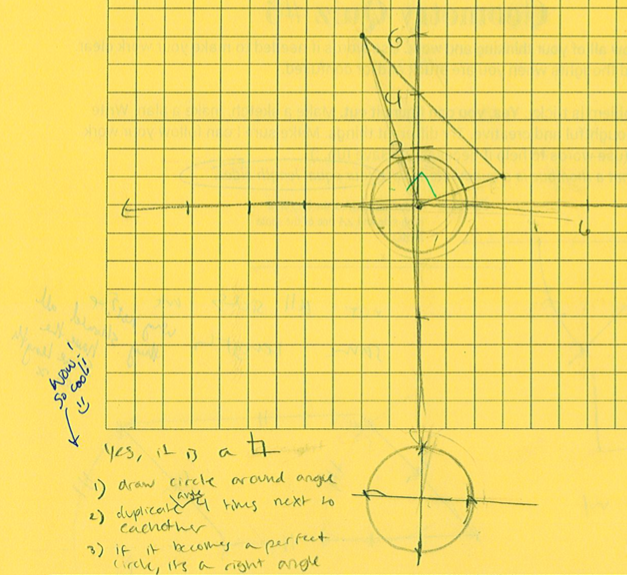 And here’s a kid who created a perpendicular line to one of the legs and showed that it was on top of the other leg.

What? Right? I mean, who are these kids, even?

“You know we hate these problems, right?”

One of the best parts of the year was a series of conversations I had with students in the spring. I was walking by a group as they worked on a problem set, and a kid said to me, “Kelly, you know we hate these problems, right?” Of course, I bit.

“You don’t have to do any brainstorming.”

I should explain, here. The problem sets were what I called “mixed martial problem solving” (or, as one of my students said, I was “the DJ of math”). They had some Exeter problems, some Park problems, some Serra problems, and even some TIPERs problems. Here’s the kind of problem they were saying they hated:

Some of the new concept development happened in Exeter problems, but I also used some of the Serra (Discovering Geometry) “discovery” investigations. These were the ones they said they didn’t like.

This class is SO my class.

And that conversation didn’t happen once. It happened on multiple days with different kids. By the end of the year, they were starting to get a little insulted by these problems. As one kid said, “You don’t even have to do the activity. You can just figure it out by reading it.”*

They push back when they don’t agree with something. They are hungry for thinking and sense-making**. They are comfortable telling me what they want and think. They tell me “no” more often than “yes” when I ask if they want a nudge. They tinker, think graphically, and take care of each other. What more can you ask for in a class?

I take a lot of photos during class. (Honestly though, my phone is pretty full of hundreds of pictures of whiteboards.) This photo is my favorite class photo I’ve ever taken (so far, at least). I think it does the best job of any I’ve seen in capturing my class at its best. (And not every day or every minute was this way, of course. But I think this is a pretty good representation of our default setting.)

Different kids are doing different things. Everyone is engaged. You can feel the thinking and collaboration happening. And no one is looking at me.

Okay, so this post isn’t very usual for this blog. It isn’t a “how to” or documentation of a particular approach or lab. It’s a love letter to a wonderful group of students, and it’s what I need at this time of year (as the back-to-school stress dreams start back up). It’s a psych up for the new groups that get to spend some time getting confused with me this year. Yes, I know how to make this happen. Yes, they can do this. On to physics. Here we go!

*Of course, if I’d continued with the class, I would have started modifying these problems to make them less fill-in-the-blank (or found some other approach)—but I’m back full time to science this year, and that was actually the last time that particular course was even going to be taught.

**This is actually a total point of pride for me in my work last year. I gave surveys throughout the year to get a feel for how they were thinking about the course. The early surveys were asking for me to do some explaining and for us to learn “types of problems” that I show them and then they practice. By the end of the year, that was almost completely gone, and they were making comments like the ones in this post. I might not have totally known what I was doing in teaching math, but I’m proud of where the kids went epistemologically.

7 thoughts on “This Class is SO My Class”