I know you’ve been there. Stuck in the doldrums of kinematics.

“It’s against the law to think in the doldrums!”

So there you are. Stuck in description-land. The juicy parts of physics (explain and predict) are far away and out of reach. You can easily spend ages and ages there. The students start to think that physics is kinematics, and have no idea the beauty and power that awaits them. It drags out longer and longer. You’re obsessing over motion maps or equations, distance versus displacement, but it’s really not even clear why we’re learning about constant acceleration when we have no idea why it’s special and deserves its own consideration and unit. We’re itching to use the word force, or the idea of momentum, but those ideas are out of reach. We have no explaining principles yet, and no way to make physical meaning of things. We’re just describing, describing, describing our lives away.

BFPM is the natural motivation for CAPM

After the paradigm investigation in my balanced forces unit, we start off with a truly excellent 5-page activity that I got from Matt Greenwolfe. It’s 5 versions of the same problem with just slight changes to the situation each time. It essentially involves a box that you first push along a rough floor, then let go of while it is already moving. Students draw system schemas, FBDs, and velocity-vs-time graphs for each stage and altered scenario. We whiteboard them as board meetings (every group whiteboards the same problem, then we circle up and argue it out until we come to a consensus).

Drawing the v-t graphs really pushes students to come to terms with the rule they’ve just invented (Newton’s 1st Law). When the forces are balanced, their v-t graph must look like the graphs they were just drawing in the constant velocity unit. When the forces are unbalanced, the graph must look different from that (have a non-zero slope). We decide pretty quickly to use straight-line segments for our graphs (instead of curvy segments) so that we’re comparing the simplest representations. Even though they haven’t studied constant acceleration graphs yet (nor do they even have the physics definition for the word acceleration, so they’re not using the word), it is pretty obvious how to draw a graph with an increasing or decreasing speed. Through the slightly changed scenarios, they also start to put together an idea of how “close” the line will be to being constant velocity (zero slope) or how “far” from constant velocity (very steep) based on how “close” or “far” the forces are from being balanced.

Later in the BFPM packet, we get to the problem that originally gave me the idea that BFPM just makes sense as a lead-in to CAPM. The football player problem (also via Matt Greenwolfe) is just a killer. Here are the packet pages.

It starts out innocently enough, with a really straightforward (and by page 12 in the packet, usually rather simple for the students) balanced force problem. Check, check, check, and they are off and running past page 12 in a hurry. Then comes page 13, and (in the whiteboarding at least), we screech to a halt.

We start playing variations on the football player’s theme. Part c (what if he pushes with more force, but Ff doesn’t change?) isn’t too tough. He’s going to speed up, right? Parts e and f are similarly straight-forward. Sure, I can trick a few students on those parts (we’re still just learning about balanced forces, and it takes quite a while to really internalize N1L). Part d (what should the player do to go from a constant 2 m/s to a constant 3 m/s?), though, consistently leads to one of the best whiteboarding discussions of the year.

While they are first encountering the problem on paper, most groups will come to the same conclusion (just push with 3/2 as much constant force, duh), and they’ll get there quickly and without much discussion. A couple of groups will be really bothered by it, as they have two ideas that both seem like they must be true. On the one hand, “push with 150 N” seems like it has to be the answer. On the other hand, don’t the forces have to be balanced for the sled to move at a constant velocity?

The whiteboarding discussion gets all tangled up in those thoughts. Eventually, they will draw good velocity graphs or motion maps that show what must be happening, then they draw FBDs that must match the sections on their motion graphs. Then they come to an answer.

But! What force does the player have to exert while the sled is in the “speeding up” part of the graph? 150 N? More than 150N? Less than 150 N? Several arguments and graphs later, they get to an idea that anything more than 100 N will make the player speed up, but the higher the force (above 100 N), the quicker he’s going to get to 3 m/s, so the steeper the slope on the graph. And bam! Motivation for building the constant acceleration model is now complete. Moreover, students enter the exploration of non-constant velocity-time graphs with really good ideas about the meaning of them, having already practiced drawing graphs for objects that speed up and slow down, and with an idea of how they’re going to be able to use them moving forward. When I used to do CAPM immediately following CVPM, they never had any of those on their side.

By the way, Matt’s materials are about to be moved to a new Internet home, which is why I haven’t linked to them above. I will update this post with a link to those materials once they have settled themselves in to their new abode.

CAPM is better when you understand forces

Forces creep into the conversation throughout the unit. From the beginning with the constant acceleration paradigm experiment (which I wrote about in my model-building post for the constant acceleration model), to drawing diagrams during the “mini-goalless problems” in the problem solving section, to pattern-finding while drawing kinematics graphs.

Here are the Stacks of Kinematics Curves pages from last year’s packet. 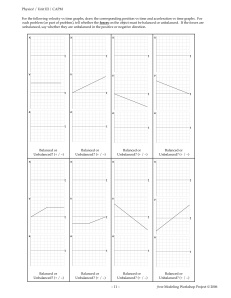 We work through these graphs and whiteboard them in two rounds (about a page at a time with the different problems split among different groups). This was a great activity even back when we did it before forces, but it becomes even more powerful with the addition of that last piece (are the forces balanced or unbalanced (and if unbalanced, in which direction) during the time shown on the graph?). Balanced or unbalanced is pretty simple for them by this point (constant velocity? balanced! not constant velocity? not balanced!), but the direction the forces are unbalanced is a tricky thing to decipher. Different students have different ways of coming to an idea about it, but the most common way to think about it that the forces are unbalanced in the same direction as a speeding up object and in the opposite direction of a slowing down one.

The really cool part, though, comes during the whiteboarding. As the examples start to accumulate, and as we settle into agreement about the correct sets of graphs, at least one student in each class usually starts to see a pattern: the sign of the acceleration always seems to be the same as the sign for the unbalanced forces. We keep checking each new example to see whether it fits the pattern. I don’t push this idea on them at all, and I’d leave it alone if no one at all started bringing it up, but it’s really very cool. Now they have an idea about the steepness of the velocity-time graph being related to how unbalanced the forces are, plus the sign of that slope being related to the direction that the forces are unbalanced. You can just feel the energy rising toward a really big idea, can’t you?

After a recent Twitter discussion with Joe Kremer, I’m also mulling over the idea of actually adding an Fnet vs time graph to the stack instead of just asking whether the forces are balanced or unbalanced (+/-). That could be great priming for the momentum transfer unit down the line, and it would be more visual than what they currently do. It would also be easier to show the situations where the forces are unbalanced, but not always in the same direction.

In any case, with the qualitative beginnings of a model for how unbalanced forces change the velocity of an object, the investigation of a quantitative relationship (the paradigm experiment in the next model, unbalanced forces) a very natural next step. The stage has been set to start building UBFPM.

Of course, there’s not One Right Way to learn physics. This post is just a way for me to share a small change that has made a huge difference for my classes, hoping that it might help others, too, or instigate good discussion/questioning about sequencing. It has certainly (and thankfully) kept me out of the kinematics doldrums for the past couple of years. I think it’s a bit faster for my classes, overall, too, since the constant acceleration unit isn’t the brick wall for my students that it used to be in the old order, but I just have a feeling about that, nothing so concrete.

So that’s my sell. Get to explaining and predicting more quickly—remember that any CVPM concept that is a little fuzzy will be practiced in BFPM and examined in more detail in CAPM, so you don’t need to spend much time with constant velocity at all before you’re ready to play with interactions.

This work by Kelly O'Shea is licensed under a Creative Commons Attribution-NonCommercial-ShareAlike 4.0 International License.
Join 689 other followers