This idea has been percolating for a while, ever since reading Sophie’s post back in September. When we came back from Christmas Vacation and needed to start flexing all of those now-unpracticed skills that we gained in the fall, the time seemed right to try out this crazy new idea.

Instructions for Starting the Date

We need all groups of two. Every group needs a whiteboard and a marker.

I tried this first in my regular classes, and we worked on this problem:

Okay, time to switch! Leave your whiteboard where it is. If you raised your hand before, move clockwise. Everyone else move counterclockwise. [Note: After doing this once, we didn’t need to go through the hand-raising routine on subsequent days. They were able to sort out having the two people from their first group just move in opposite directions.] Okay, great. 5 more minutes with this group. Ready, set, go.

Everyone is now with an entirely different partner (in many cases, the partners were pairings that had never happened by choice the entire semester!) and no one had their own work in front of them. There was a tense moment where I wondered whether they would just complain, be exasperated, shut down, or actually do the work of figuring out what the others had done and start adding to it. Amazingly, they started adding to it!

One group simply erased the entire whiteboard and started over, not understanding anything that had been left for them. I didn’t see that happen again in any of the next 4 times that I tried this activity. One group wasn’t making much progress until someone from the next table noticed them and said, “Hey, I’m going there next! Do some work for me!”

When the 5 minutes were up, I looked around and saw that we probably had about 5 more minutes worth of work to do in order to get the boards to a mostly-finished state. So we switched again. 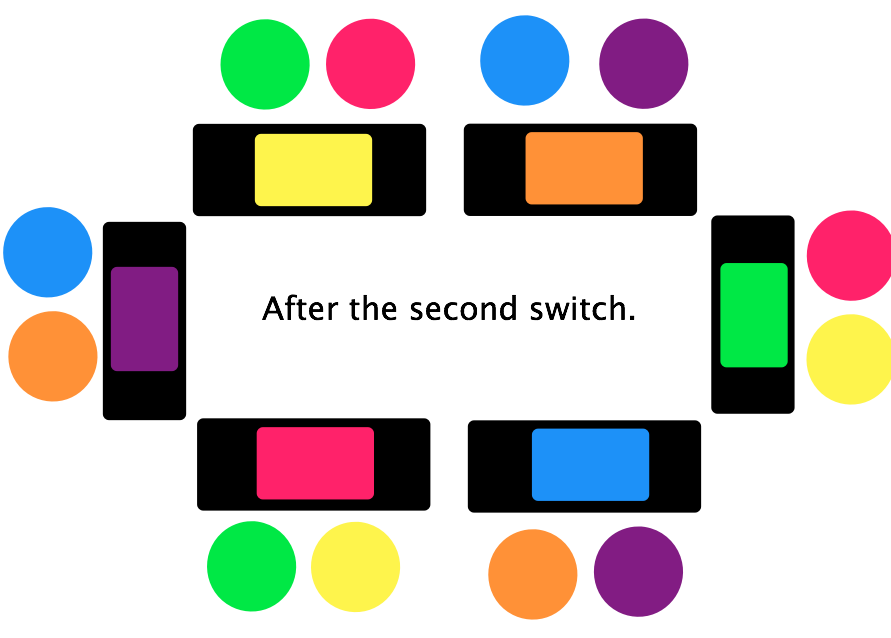 Now, again, a different pairing and completely different work. Most boards are close to being finished and so some puzzling starts to happen. “Why did they do this?” Some had written mostly answers absent of work, and two generations of physics students down the line now had to figure out not only whether the answers were correct, but also how they had even gotten there.

At the end of the 5 minutes, we decided we were finished with the problem and had a board meeting (we all sit on the tables and hold the boards in front of us (but not in front of our faces) so that we can see everyone’s work and look for places we agree/disagree). It was a more interesting meeting than usual since everyone was holding work that wasn’t entirely their own. They sometimes had to try to explain something that they wouldn’t have chosen to do themselves. In some classes, the students voted on the board they thought was best and had that group simply present it. Since the ideas about approaches were rotating about the room, the boards looked similar, but not identical.

There was some time pressure to get work on the board, but it was a good pressure that was absent of any kind of anxiety. The time limit was just about how long you had with that particular board, and when time was up, you were on to the same challenge, just remixed.

Most of the above was a description of how the whiteboarding went in my regular physics classes. In Honors Physics, they loved it so much that it got a mention on the course evaluations as a favorite activity after only trying it once. One class asked to do a momentum problem the same way in our next class meeting (our first try had been a goal-less energy transfer problem) because they knew they needed more practice on that topic before the exam, and they thought this activity would be the best thing to help them.

We wouldn’t want to do this kind of whiteboarding every time, but it seems to be a nice way to break things up. It probably wouldn’t work as well near the beginning of a unit (5 minutes would be a short and frustrating time while they are just developing skills), and it definitely requires a complex enough problem that there can be at least 3 “dates” worth of work done on it.

I will definitely be using this one as often as is reasonable (maybe a couple of times per unit) from now on.