Disclaimer: I most certainly did not come up with this type of diagram, though the name (IF charts) is probably unique to my classes since it’s based on the way one of my first Modeling Physics students drew her bar charts. This post is meant to be a how-to and a why-to guide for the diagram.

While building the momentum transfer model, we need a new representation for thinking about how momentum is transferred between objects. It has to include a before and an after portion since we use the model to talk about what happens over a change in time. And in fact, we usually are talking about some (relatively) exciting thing that happens by analyzing the states of the objects immediately before and after the event occurs.

Some IF chart examples

How about the general situation happening in our momentum transfer paradigm experiment first? So a moving cart hits a stationary cart. They stick together after the collision. Let’s say (for the sake of concrete examples) that the moving cart has twice the mass of the stationary cart (so, 2 bricks vs 1 brick) and is initially moving at a speed of 0.5 m/s. 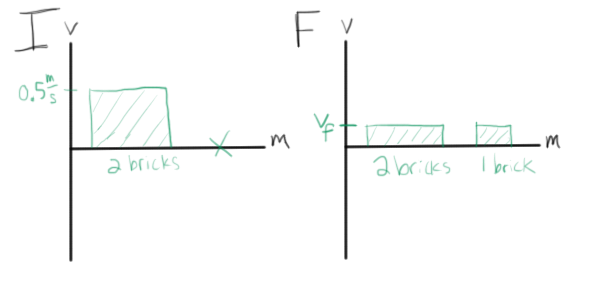 For the next example, let’s say that we have two carts that are initially  stuck together at rest, then “explode” (via the spring in the plunger cart) and move off in different directions. Let’s make the carts have masses of 3 bricks and 1 brick. 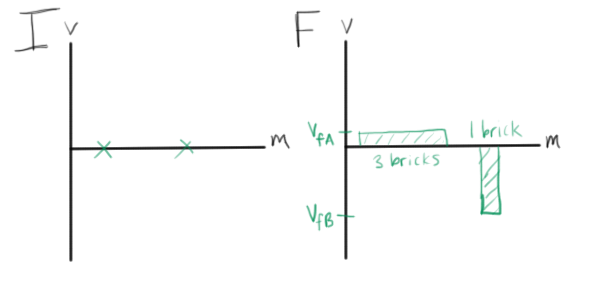 How about one more. This time both carts are initially moving in the same direction, but at two different speeds. They collide but do not stick together.

Features of the IF chart

The bar charts themselves have velocity on the vertical axis and mass on the horizontal axis. Or to say it another way, the height of the bar shows the speed and direction while the width of the bar shows the mass. In order for the charts to be useful visualizations of the situation, it’s important to exaggerate differences between objects in their mass and speed (some students like to draw most everything the same height or width and need prompting to get into the habit of making these features meaningful).

Once you draw your first chart and have everyone sit back to consider it for a moment, students will pretty notice that the area represents the momentum of the object (area of a rectangle being the base times the height, so the mass times the velocity for these bars).

So. If momentum is conserved for a given situation (that is, if there is no momentum transferred into or out of the system), then the total area on the I chart should equal the total area on the F chart since the area of each bar represents the momentum of the object and the total initial and final momentum of the system should be equal. Cool! That idea (conservation of momentum –> conservation of IF chart area) also usually makes a lot of sense to students.

A couple of (picky) notes on usual usage:

And there you go! But, of course, we’re not finished with the diagram yet. Now that we’ve qualitatively modeled the situation, we want to use our diagram to make a more quantitative description. And we want to put it to use in solving problems.

Using the diagram to write an equation

As with our other favorite diagrams (velocity-vs-time graphs, free body diagrams… hmm, two more subjects for future posts!), IF charts start to become more powerful when you annotate them and use them to write equations. The diagrams in the examples above have already been annotated, so we’re ready for the next step.

For the three above examples:

You end up with a simple-to-solve equation and no formula to memorize. You write your own equation using the IF chart every time!

2-D problems and double IF charts

The charts scale well for two dimensional problems. The similarities between doing a Newton’s 2nd Law analysis in component form and doing double IF charts are also pretty evident. (I only do 2-D momentum problems with my Honors Physics students. We stick to 1-D problem in the regular class.) When we talk about 2-D problems, we note that we have two ways to solve them: using double IF charts or drawing a vector diagram (which we start by writing an equation in symbols and isolating the quantity we want to find). Drawing the vector diagram takes a lot less time and makes good sense to many students, so a lot of them actually choose to do 2-D problems that way instead of breaking the vectors into components. Double IF charts are always an option, though.

The future of IF charts… IFF charts

As useful as they are, IF charts are really lacking when you’re representing a problem that has a net outside force (and therefore momentum being transferred into or out of the system). The IF charts are now “unbalanced” (like an FBD that shows there is a net force on the particle), but you can’t represent how unbalanced they are in an obvious way. In fact, students tend to think you can’t use the charts at all if momentum isn’t conserved.

So I’m planning to try out a tweak on IF charts when we get there with my regular classes (we’re about ready to start the unit when we return from Christmas Break in January). We’ll try drawing IFF charts (if and only if charts…?). The extra F (in the middle, if you couldn’t tell) is for a Force-vs-time graph. Here’s what I’m thinking…

An example of a “balanced” situation where there is no net outside force: 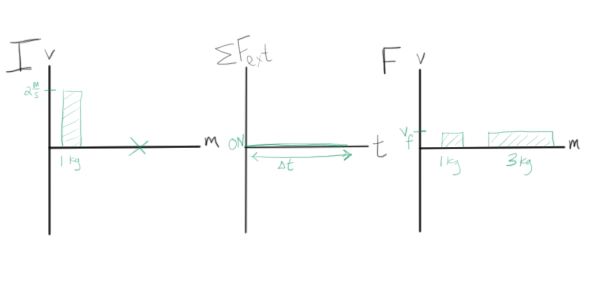 An example of an “unbalanced” situation where there is a net outside force on the system: 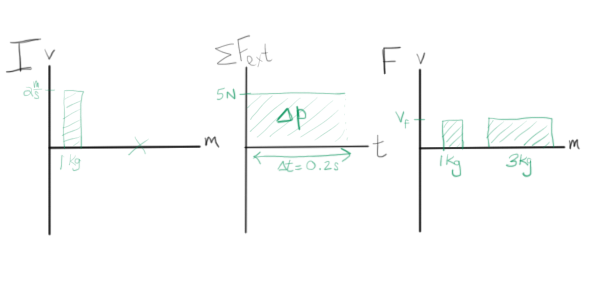 Suddenly the charts became a whole heck of a lot more meaningful and powerful.

I haven’t tried these in my classes yet, so I don’t know how students are going to respond to and interact with them. If they work out well for the regular Physics! kids, I’ll share them with the Honors guys when we circle back to our second unit on momentum (now with energy!) this spring.

Edited 12/29/11 to add in some more details via Kathy Harper on the AMTA listserv.

I just wanted to add to the discussion that the original work-energy bar charts were developed by Alan Van Heuvelen.  (If you can manage to get a copy of his Active Learning Problem Sheets, or ALPS kits, I highly recommend it.  There are lots of nuggets in there, including great exercises to instruct students in the bar chat approach.  The kits are technically out-of-print, but I understand there are still ways of tracking down copies.)

The first person I saw take the chart idea to other domains, including momentum and angular momentum, is Tom O’Kuma at Lee College in Texas.  He is very active in AAPT, particularly on the two-year college scene.  I would suggest that we think of momentum bar charts as “impulse – momentum” charts, which would address some of the issues brought up in the previous post.

This work by Kelly O'Shea is licensed under a Creative Commons Attribution-NonCommercial-ShareAlike 4.0 International License.
Join 692 other subscribers