My Physics 10 (a trimester-long class exploring E&M topics for 10th graders who haven’t yet studied mechanics) was wrapping up some extensions to an electrophorus activity. They were already pros at explaining and predicting electrostatic phenomena, but this activity gave them yet another way to test out their thinking, practice their charge diagrams, and add depth and subtlety to their understanding. (I adapted instructions and ideas from this activity that I found in a quick search and that I had left for students last trimester when I needed to miss a day of their class.)

On the first day, they built and explained the electrophorus. 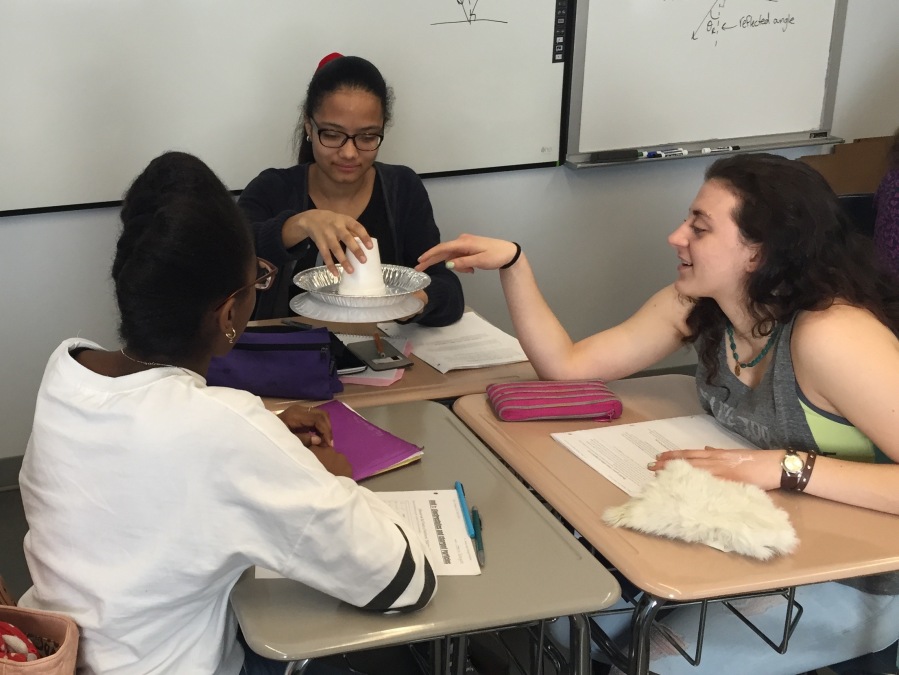 They made whiteboards at each table to work through the step-by-step charge situation. 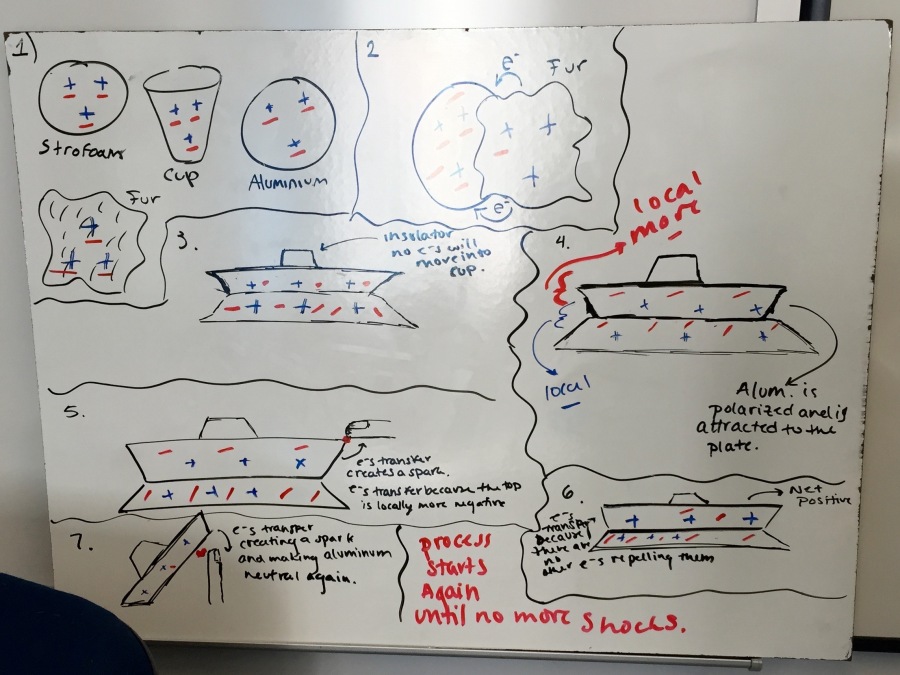 On the second day, one group talked us through their whiteboard. (They were ready to present it at the end of the first day, but as soon as they got everyone paying attention to them, the fire alarm went off for a drill.)

After that, they went to work on some extensions. They tested the pan and the plate against Upper Tape and Lower Tape. They made an aluminum foil person with hair (as described in the document) and explained their observations when they tested it out. One group took their entire apparatus to the bathroom (which doesn’t have windows) because they wanted to know if you could see the sparks when you got shocked. Some groups tested pieces of their setups against other groups. Some got more involved in the foil person. Some only barely got started with the foil person. Some followed the prompts given by questions that I had put in their packets. Some ran off to test their own ideas.

When it was time to clean up the classroom, one group stopped me and asked, “Kelly, what if we didn’t finish all of the questions?” It was one of those great moments when a student helps you clarify something you’ve been doing, even doing intentionally, but hadn’t verbalized or made explicit before (even for yourself).

So here’s what we talked about. If you didn’t finish the questions, that’s okay. That’s generally always okay. No question is really that important. None of the questions are important? Well, none of them are important on their own. No packet falls apart from not doing one of them. The knowledge we are building isn’t so fragile as all of that. We’re building in redundancies in our explorations. We’re constructing ideas and then testing them multiple times and in multiple ways. We’re reconstructing these ideas. We’re modifying them. We’re strengthening them.

Maybe you noticed something peculiar about how this class is structured. Probably for the first few days, you left thinking, “Well… okay. I was able to do what we were doing, and it was fun, but I don’t think I really get it.” Um, yep! It was probably like that for a few days, and then all of the sudden, it really started clicking. And now you feel strongly that you really understand what you’re doing. True, true. It kind of layers itself like that. It takes a little while, but then you really, really get it.

This work by Kelly O'Shea is licensed under a Creative Commons Attribution-NonCommercial-ShareAlike 4.0 International License.
Join 692 other subscribers