Hey guys! [Turn on hover disc. Wait a moment. Turn it off.]

Something new! Let’s look at it!

I want to show you something cool. Let’s all sit on the floor right here. [Get everyone sitting in a circle in the middle of the room on the tile floor. Turn the hover disc back on. Slide it over to someone very near to you.] Ooh, fun! Right? [Motion for them to slide it back. Turn it back off. Slide it over toward them again.] Whoa, that was no fun at all! Why was it fun when it was on but not anymore? (Kids immediately tell you that there’s no friction when it is on. Curse that fun-killer, friction!)

Now this is a toy, and you guys are Big Kids. When you were Little Kids, you could play with toys without worrying about breaking them. So let’s just remember to be gentle.

Okay, in a moment, not yet, I’m going to turn this back on and gently pass it across the floor to someone else. When it comes near you, go ahead and gently pass it on across the circle. It is easiest to observe when it is going somewhat slowly, so don’t speed it up too much. Gentle passes, guys.

As it is moving around, let’s specifically watch the motion while no one is touching it. Look at how it moves in between the touches. [Turn hover disc back on. Pass it around. Keep reminding them to go slowly. They remind each other, too. After a couple of minutes, get someone to pass it back toward you. Turn it off.] Okay, what kind of motion was it? (Answers vary. Usually they will get to saying that it goes in a straight line and at a constant speed. If they can’t agree on whether the speed was constant, then do it again briefly looking specifically for whether the speed was constant or not.) So, was it CVPM (that is, could we model it with the Constant Velocity Particle Model)? (Usually they say no right away, then they quickly change to, Oh! Yes!) How about when you were touching it? What happened? (It sped up / it slowed down / it changed directions.) So was it CVPM when you touched it? (No.)

There’s one more thing I want to show you. [I have previously forcibly attached a paperclip to the center of the hover disc and it has a bit of string tied to it. I tie a longer string to it now.] I’m going to pull the hover disc horizontally with the rope. We’ll watch what happens and decide what kind of motion it is. [Turn hover disc on, and pull with rope. Optionally, you can attach a spring scale or spring to make it more of a constant force, but it works just fine even if we don’t know that the force is constant. Keep the string parallel to the ground, or you will regret it in 20 minutes or so.] Is it CVPM? (No! It was speeding up!)

Okay, let’s go back to the tables and put together some new representations to describe what we saw.

When we were looking at motion in the CVPM unit, we looked at intervals of time. With forces, we focus on one snapshot at a time instead of a duration. We had three diagrams that we could draw for CVPM, right? (x-t graphs, v-t graphs, motion maps) We’ll have three more for forces, soon. We’ll get to start playing with two of them today.

The first representation is called a System Schema. There’s some space in your packet right inside the first page where you can draw your own diagrams. We’ll do four situations, and each of them will have two diagrams. If you want to plan ahead, just sort of mentally divide the page into quarters so that you have plenty of space.

So a System Schema shows the objects that are interacting and what types of interactions they are having. What objects are interacting with the hover disc? [As kids start saying things, write objects on the board and draw circles around the names. If the kids don’t introduce enough random objects, start adding some of your own. You need way too many objects for this first system schema so that they start building an idea of what objects are minimally necessary.] Great.

Now we connect the objects that are interacting and label the connections with the types of interactions. [Some back and forth as they tell you what connections to make.]

Final step. We draw a dashed line around the object or objects that we are focusing on. Any lines that cross that boundary are forces that are acting on the object. So how many forces are on the hover disc? (2) Great! Now, I think we had more objects in our schema than we really needed. Which ones did we really need to have (Earth, floor). Did it hurt anything to have the extra objects? (Not really, no.) So as long as we make the correct connections, it’s okay to have extra objects in there. Once you’ve practiced a bit, you’ll usually be good at knowing which objects are the ones that are important to include.

Once we have the system schema, we know all of the forces acting on the hover disc. The free body diagram is where you represent the object as a particle and show the forces on the object with their directions. Remember that we represented the object as a particle (a dot) on our motion maps back in CVPM. So. Shrink the object to a particle. And what’s one force acting on the hover disc? (Gravity) What direction? (Down) Down toward the center of the Earth. What object exerts it? (the Earth) We’ll write that in parentheses so we know what object exerts each force. Great. What’s the other force? (Normal force from the floor) Crunchy force, great. What direction are the atoms being crunched? (Umm… perpendicular) Perpendicular to what? (To the floor) So that’s up or down, right? (Okay, up, because they floor is pushing up from underneath it.) So that’s it, yeah? 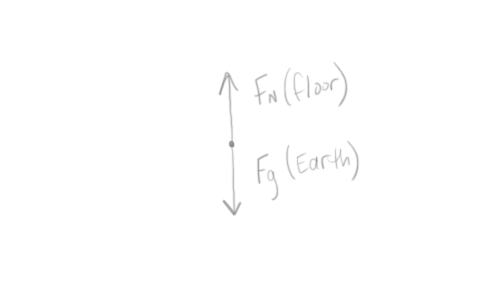 Hey… does that look kind of balanced to you? (Yeah, I guess so) And what kind of motion was it? (At rest) So is that CVPM? (No… oh wait, yes.) Cool. Ready for the next situation? This is going to be our second out of four snapshots. 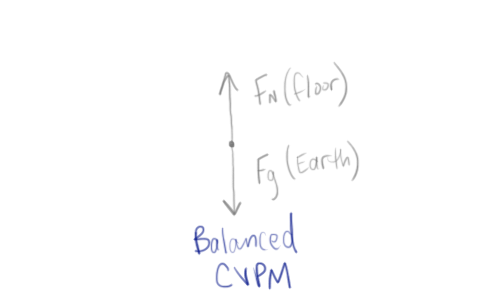 Okay. We’re all sitting on the floor. The hover disc is on. The disc is moving, but no one is touching it right now. Snapshot. Got it? On the floor, turned on, moving, no one touching. Snapshot. [Camera finger motions each time you say snapshot.]

Why don’t you guys get a couple of steps ahead of me in drawing the system schema. I’ll give you a couple of minutes, then you’ll help me draw mine on the board. [Wait a couple of minutes, then get them to start telling you which objects to draw, then which connections to make. Purposely put the objects in a different arrangement this time so that they see there isn’t one correct placing to draw. Also, brief discussion about how we don’t need to make connections that don’t involve the hover disc, but that it is okay to do that if you need that sense of completeness to fulfill your physics zen.]

Hey… does that look kind of balanced to you? (Yes) And what kind of motion was it (It was CVPM when we weren’t touching it) Cool. Ready for the third snapshot?

Go ahead and get ahead of me on the system schema. [Same kind of discussion as before when they’re ready.]

Let’s shrink it down to a particle and draw the FBD.

Hey… does that look kind of balanced to you? (No!) Oh, okay. So unbalanced, then. And the motion… was it CVPM? (No, it was slowing down.) Okay, so changing velocities. 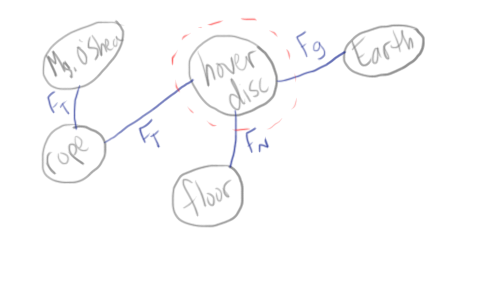 Hey… does that look kind of balanced to you. (No) And the motion? (It was speeding up.) Great.

Is anybody seeing a pattern here? [Stand back. As you go, you’ve kept one spot on the board where you keep erasing and drawing a new system schema, but the FBDs have stayed up in order across the rest of the board. Let the students look at them all together and see if there’s a pattern.] (Someone will, without realizing that they’re saying something really important, casually and quickly say, “When the forces are balanced, it’s constant velocity, but it changes velocities when the forces are unbalanced” or something else very similar.)

Whoa. That seems like kind of a big pattern. Is anybody else getting goosebumps here? So balanced forces, constant velocity. Unbalanced forces, changing velocity. That seems like a pretty useful pattern, actually. (Yeah) [Short pause while this sinks in.] Okay… would it surprise you guys to hear that someone else noticed that same pattern before we did? (No way!) [Shake fist dramatically.] Curse you, Isaac Newton, for being born hundreds of years before us! This could have been (Susie, or whatever the kid who said it is called)‘s Law! (Is this Newton’s 1st Law?) Yes, yes. That’s what people generally call it. There’s a space to write down Susie’s Law on the front of the packet.

N1L: If the forces are balanced, the velocity is constant. If the forces are unbalanced, the velocity is changing. [OR whatever your class decides is best. Soon, if not now, a discussion about “inertia” (you mean “mass”?) and “object in motion” type of unhelpful phrasing will come up. Discuss how “stays in motion” could be slowing down, speeding up, or changing directions, so it isn’t a specific enough way of saying things to be helpful to you guys when you want to make explanations or predictions in the future.]

This work takes around 2 class periods (about 80 minutes). Before we do this day, I spend 25 to 40 minutes to get common vocabulary. We discuss English meanings of the word force, and I tell them “my” physics definition (an interaction between two objects). We define names, symbols, general directions, and cases where they are present for 4 or 5 common forces (gravitational force, normal force, friction force, tension force, sometimes also spring force). Without getting the common vocab first, it would be much tougher to do what I described above succinctly. We also play a bit with a matter model and talk about the normal force in terms of atoms being crunched and the friction force in terms of atoms being sheared. I always call “strings” as “ropes” because string and spring sound too similar and we end up getting confused and frustrated at some point that way. Also, I didn’t come up with this paradigm investigation. It is basically the Modeling Instruction paradigm lab, I think.