Hey guys, bring a pencil and a calculator next door. I want to show you something that’s been bothering me a lot.

I’ve been thinking a lot about springs.

They’re sort of odd, you know? When you hold them like this [hold spring looped to one finger on each hand and stretched a bit] and then like this [same as before, but move hands a farther apart so the spring is stretched more], there’s definitely something different. Right? [Right.] But Newton’s Laws (great as they are) don’t seem to cover it completely. I mean, everything is at rest both times, so the forces are balanced both times. [Right.] But something is definitely different.

What’s different about the spring?

So I have an idea about how to visualize what is different when a spring is stretched more or less. I was thinking that we could attach the spring to a cart. The spring would pull the cart as it “unstretched” and make the cart speed up.

We could do the same thing to two carts at once and see the difference in the effect on each cart. So it would be a sort of cart race to compare the spring effects.

We could use the “special” box of springs from back in the balanced force unit. Remember when we found the spring constants for them (during the Fs lab)? It will be convenient to already know those values. 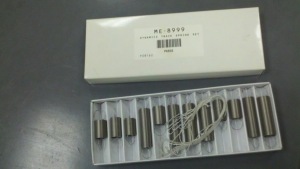 If you open up the new packets to the first inside page, you’ll see that I put in spring force (vs spring stretch) graphs based on the data from your experiments back in September for these two springs (the two different versions of the longer spring in that box).

[Hand the two springs to one kid.] So which one is spring 1? [After a couple seconds, the kid realizes that she can figure that out from how “stretchy” the springs are and identifies spring 1.]

Great idea: we could use two different springs in our race. If we could get them to give the same spring effect to each cart, then we would have a foothold in identifying what it is that’s different about the springs when you stretch them more or less. [Kids seem to think this is at least a decent idea. A minus of this experiment is that I’m not setting them up to have the great ideas about what to set up, though they do get to have the great ideas about how to get the carts moving with the same speed.]

We need two people who are going to be very careful in making measurements. And each of them needs a backup person to watch what they are doing and double-check the measurements. [Eventually two kids will agree. Usually, though, everyone knows who the careful measurers are, so they pressure them into doing the job. I use the names of the kids a lot to help everyone keep track of which spring/cart we are discussing, so let’s name them Aaron and Bertie for the purposes of this post.]

Okay. The springs are hooked onto the carts at one end and onto paperclips tied to strings at the other end. I will hold the ends of the springs. Aaron and Bertie will move the carts so that the string is just barely taut. Then they will pull the carts back to stretch the springs. Make sure you look at the edge of the cart to measure the stretch, not the spring, because it will be easier to be precise in moving the cart.

Now we need an idea for how to stretch the springs so that they will give the carts the same effects.

[The first suggestion is almost always to give them the same stretch. Sometimes students will quickly dismiss that idea because the springs will have different forces. Even when they dismiss it at first (and then almost definitely decide to try the same force first), they usually then try the using the same stretch second (thinking maybe they were wrong that the different forces would matter since the same force didn’t work). Overall, there are four usual suggestions. All four of these usually get suggested (though not all at first).]

Same stretch (run on the graph)

Okay, good idea. So let’s have Aaron and Bertie both stretch their springs 10 centimeters. The backup person should watch what they are doing and make sure the stretch is really 10 centimeters.

Ready? On the count of three… One, Two, Three!

Huh. That didn’t work? Let’s try that again. [When I say that, the kids often say something like, “Was it supposed to work?” They’re so used to verification labs, even at the end of the first semester (or close to the end of the year in my regular class) that some are already willing for you to just tell them what was “supposed” to happen. Yikes. I respond, “I’m not sure. Let’s try it again one or two times to make sure we keep seeing the same thing.”] Wow. Bertie’s cart wins every time? [At this point, someone will note that the forces are different so it isn’t really surprising that Bertie’s cart would win. That leads us to the next idea…]

Same force (rise on the graph)

Huh. That didn’t work either? Let’s try that again. Last time, Bertie’s cart won. This time, Aaron’s cart wins. So, at least we know that there must be some way of making them equal in between those values. But neither the run nor the rise worked for making that happen.

Well, is there any other feature of a graph that we’ve found to be physically meaningful? [Almost every time, the first answer will be to make the slopes equal.]

Great! We’ve definitely seen the slope of a graph represent physical quantities before. So how do we change the slope for the spring? [After a few seconds, they will realize that they already know what the slope represents and that they can’t change the spring constant without changing the spring. Back to the drawing board.]

Okay, so not the slope, then. Any other features of a graph that we’ve found meaningful this year? [It often takes a minute or two for them to think through this idea. They will usually either say area (yay) or displacement (boo… they think displacement is a word that means area on a graph, not a word that means change in position for an object).]

Another good idea. Let’s keep Bertie’s spring stretched to 10 centimeters. What’s the area under her spring’s graph if the spring is stretched to 10 centimeters? [Give them a few minutes to figure that out.] Okay. So we need to figure out how much to stretch Aaron’s spring so that his graph will have the same area. [This is absolutely the toughest part. In Honors Physics, some to most of them will figure it out without much prompting. In regular Physics! class, they usually need a lot more guidance on how to set up that kind of calculation. I relate it back to kinematics problems where they knew the slope (acceleration) and area (displacement). They have solved many problems like that in the same graphical manner. I might also briefly mention the ACT science section and applying graph skills to new contexts to make that connection for them.]

[Check that each person knows how much to stretch the spring.] Should we try it? Alright!

Hey! That looked pretty good! Let’s try it again and make sure it really works. Cool! [And yes, they are pretty psyched that they’ve found a way to make the spring effects the same for both carts.]

So… do you think the area has a physical meaning?

How about graphs that didn’t have physically meaningful areas? [A few will quickly mention position-vs-time graphs as they have tried to use that area for something before!]

So each of those areas has always shown us a change in something. Interesting.

Do you think the area on this type of graph has a physical meaning? [Well, yes.] Why? [The carts had the same speed when we made the areas the same.]

At this point, we’re coming around to the idea that the area on this graph (a force vs displacement graph) represents a change in something meaningful. Having cleverly read the front of the packet, they will always suggest to call it energy. The big idea here: the area on a force-vs-displacement graph represents the change in energy. Some smaller ideas (like energy being transferred to the cart by the spring) are starting to percolate. We’re about out of time for one day, though, so we’ll have to keep building this model next time.

Follow-Up Posts in the ETM series:

This post details the first day (about 40 minutes) of my energy unit. We have just started building the model. There are a few more steps to piecing this whole model together (building a common vocabulary about energy and two new representations), and I think they warrant separate posts. I will update this post with the links as the next few are written.